OK, folks. The most classic line I just heard on the NBC Today show. The CEO of the USATF was just interviewed on live television saying he listens to music while running. I turned on the TV to see if the NYC Marathon was coming on and low and behold the “Karl Rule” was brought up. The race Director was more interested in people having fun running the “ultimate distance”, than policing people wearing headphones, we like the RD. The women interviewing the CEO of the USATF said, “lots of runners will be wearing hats so they can hide the earphones”. Perhaps she has encouraged people to just break the rules. We can go on and on about this. Classic how the USATF contradicts themselves, eh? Crank it up people!!!!!!!!! 10 scrapes for tunes!!!!!!!

Our thoughts reach out to Ryan Shay’s family and friends! 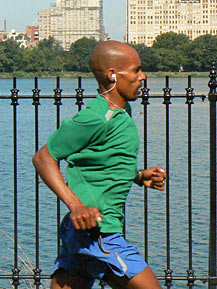