Looks like the southern goats are ready to rumble through the Talladega National Forest for a point to point 100 miler.This is the second annual run for the race and who else but Speedgoat Meltzer is there ready set the standard. Last years win was over 20 hours, I’m sure that will change. Looking forward to watching  team mate Tim Barnes run his first 100, scrape on!

Make sure you whiz on the run and race your down time, this will translate to a faster finish…10 scrapes.

Introduction: A protein is any one of a large number of organic compounds that make up living organisms and are essential to their functioning. First discovered in 1838, proteins are now recognized as predominant ingredients of cells, making up more than 50 percent of the dry weight of animals. The word protein is coined from the Greek proteios, or “primary.”

Protein molecules range from the long, insoluble fibers that make up connective tissue and hair to the compact, soluble globules that can pass through cell membranes and set off metabolic reactions. Humans are made up of an estimated 30,000 different proteins, of which only about 2 percent have been adequately described. Proteins in the diet serve primarily to build and maintain cells, but their chemical breakdown also provides energy, yielding approximately 4 calories per gram, similar to carbohydrates.

Proteins are composed of about 20 different amino acids which in turn, are composed of carbon, hydrogen, oxygen, nitrogen, and sometimes sulfur. In a protein molecule, these acids form peptide bonds between amino and carboxyl (COOH) groups in long strands (polypeptide chains). The numerous combinations, in which the acids line up, and the helical and globular shapes into which the strands coil, help to explain the great diversity of tasks that proteins perform in living matter.

Check this out, I paced John Maack at the 2007 Wasatch 100 and this guy really had his drop bags worked out! No they were not bags he used orange 5 gallon buckets! Yea, buckets, what a great ideal! Here are the immediate advantages I noticed;

Karl Meltzer and Scott Mason share another trail running tip on uphill running. This tip can help with those 100 milers with a ton of climbing! Three scrapes~ 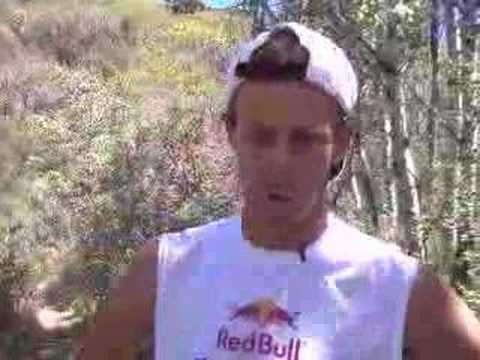 What to do with empty gel packs during a 100 mile race? When I was running the Bighorn 100 this year I discovered the convenience of putting those empty gel packs under my water bottles inside my Nathan Pack! This works real slick, they are easy to pull out and dispose of at the aid stations while the crew fills your bottles. Did you ever finish a 100 miler with a pocket full of empty gel packs that dried into a clump of crystallized sugar? The empty gel packs end up a little wet from the water bottles so they do not stick to the pack, this is for only waist belts. If you have a convenient way to rid those sticky gel packs into a running back pack, let us know! Remember speed tip based on eating two to three packs of gel per hour! Bahahaha!

Runners spend way to much time digging through their drop bags at aid stations. You should be able to run a 50k without any drop bags as long as there is aid stations with the basic fluids and snacks. On a 50 miler you should only need one drop bag with some xtra gu or a food, as long as there are aid stations with the basics. These days it’s like having 7-11’s all the way thought he race, it is easy to get caught up in the drop bag frenzy ! Take a look at what you really used after a race a streamline that whole process. I was running with Charlie Vincent at the Moab’s Red Hot 50k and he nailed it ” I can’t keep up with these younger runners until the the aid stations and then I pass them.” It takes time to figure out your specific needs during an Ultra, but you will find out you need less then you think! Remember next race to run against down time, that will translate to a faster ultra.

Sign up now on-line for the Wasatchspeedgoat “Get High” 50k rugged trail race through Snowbird and Alta Ski Resorts. The race takes place 7/21/07 at the Snowbird Tram deck, get ready to run through the tunnel~race app

I was taught from day two to wear bike gloves

in the rugged Wasatch Range, Meltzer clued me in after my first endo down Grandier Peak. I was racing Karl down a steep pitch when I caught a toe and launched 10 feet through the air only to plunge to the ground hand first. After trail rash on both hands I went out and bought a pair of $10 biking gloves that completely protected my hands during future endo’s. Another benefit is you can stick a pack of gu in the top of each glove when you load up for a big run or race. Once you get used to the gloves protection, you can’t run technical terrain with out them. Ask Paul from Montrail, we did a super technical night run up Little Cottonwood Canyon to the Pfeiferhorn, when we returned Paul had a flapper on the palm of his hand, ouch!

Sign up now on-line for the Wasatchspeedgoat “Get High” 50k rugged trail race through Snowbird and Alta Ski Resorts. The race takes place 7/21/07 at the Snowbird Tram deck, get ready to run through the tunnel~race app

NOTES FROM THE GOATS:
I’ve got blisters on my blisters, isn’t that from a Beatles album? In the first days of ultrarunning your feet are tender and you can end up with some big blisters during those 100 mile races. I used to have mole skin, second skin and all kinds of remedies for those pesky blisters, and then I learned to run through them. You can feel the blister developing for several miles and then the hot searing pain of a busted blister begins, this is where it gets tough. The trick is to run faster and ignore the pain for 5 to 6 miles until something else hurts ! p.s. do not take your shoes off!! Bahahaha! one scrape~

Did you ever got the yawns during the night section of a 100 mile run. It’s always puzzling when you begin to run with your mouth wide open yawning like you haven’t sleep for a day or so. The yawning seems to be a limited cycle, as if your body is trying to remind you that it is past your bed time? I have suffered through this cycle several times, if you ignore the sleepy reminders your body will eventually give up and you keep running. Last year the yawns hit late into Wasatch 100 and I had Power Gel

with the caffeine for this reason, I downed two packs at once and within minutes the yawns vanished, wow it really works. When you pack your drop bags, make sure you have the Power Gel with caffeine for the yawny sections.

When the Wasatchspeedgoats run a 100 mile trail race, they race the clock to win down time. Always try to keep your d/t under 60 minutes for 100 miler. WSG Training tip: keep moving and never sit down at an aid station. Bahaha!! Two scrapes!

Never leave your drop bags with the crew! Imagine you are coming into an aid station to pick up your night time gear, your crew gets a flat tire and misses you at the aid station. Wow, what do you do now? I always rely on the aid station folks to have my bags, they have several hours lead time to get your stuff to the aid station even if they have an incident. My crew(wife and kids) always have a single bag to take to all the aid stations, this includes a variety of stuff like back up Petzl lights, batteries, GU, socks, first aid, xtra running belt in case one breaks and other back up items. This will insure you always have access to all types of gear all the time.